Over last last while I got confronted with this topic quite frequently. Eventually this german article – or more precisely the comments below it – caused me to write my own little post on my personal perception of how innovation takes place in Germany. For the non-german readers among us I want to give a brief summary of that article. Recently the german internet provider “Unitymedia” came up with the idea to provide free WiFi-Hotspots for everyone, since internet connection in public places is pretty much a negative report in Germany. The key point with that is their intention of how to implement those so called “WifiSpots”. Every Unitymedia customer who has a Wifi-capable router in her home should become such a hotspot, while they promise that the hotspot network is completely isolated from the customer’s own network – in terms of both security and bandwidth. Personally I like the idea, because I consider it quite efficient. Why put effort in distributing routers in public places if there already is full Wifi coverage? Most people’s routers are nowhere near working at capacity anyway. And if it’s guaranteed that the public internet traffic doesn’t influence you at all, why not? The article tells that the consumer protection center of North Rhine-Westphalia had admonished Unitymedia for their plans recently. One of the top comments below the article says about the following:

“That’s exactly the reason why innovation isn’t possible in Germany. As soon as a company tries to solve people’s problems, everybody goes to the barricades. One gets punished for experiments – not surprisingly nobody wants to found a company.”

Even though the comment received a lot of bad write-up, that boils it down for me quite well. In my opinion Germany is ways too sluggish and conservative when it comes to adapting something new. Even though most representatives of the german manufacture consider themselves progressive, I actually don’t think they are – at least not as much as they once were. I went to a conference on Industry 4.0 last week where one speaker claimed that Germany was at least one to two years ahead of other countries at Industry 4.0 topics, but what I picked out between the lines is that quite the opposite is true. While the Germany are continuously trying to define standards, develop well-defined business-processes, clarify legal aspects and the like other countries are just doing it. They simply try it out, taking not too much risk, and if it fails, it fails. But if it succeeds – and I claim that if not applied totally wrong, new technology is likely to – they are given a competitive advantage, while the current big players’ lead is melting. Of course, with this attitude you are more likely to fail as if you examine every little aspect fussily. But you’re also so much more likely to win big. As a professor at university had repeatedly said: “think big!”.

“If your dreams do not scare you, they are not big enough! – Ellen Johnson Sirleaf”

That’s what often is referred to as the Silicon valley mindset. In fact, as the diagram below shows, most startups are founded in the U.S.A. and I guess if there was a ranking of really big and successful startups (like Uber, WhatsApp, Tesla, …) the contrast would be even more dramatic. Take Elon Musk – the founder of Tesla Motors and SpaceX – (I really recommend his biography) as an instance. He thought big and he obviously won (admittedly he took a really high risk). I don’t think they evaluate and plan new technology (like VR and stuff) that much at SpaceX – they just do it. 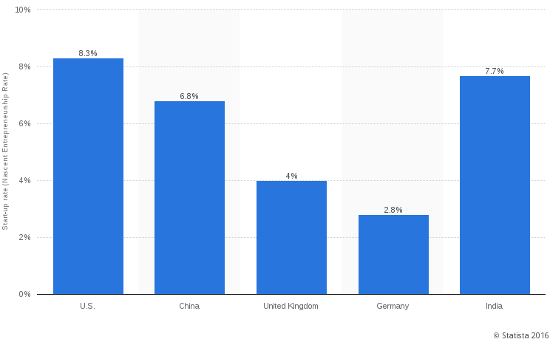 Another example for Germany’s innovation power is the following. I’ve worked for two different companies as a working student – both were software manufacturers. One was a typical german medium-sized company and the other was an american corporation. In one of them, the second-latest version of Internet Explorer was the only browser installed on every employee’s computer and if you desired another, you had to open a ticket to make the software distribution department install an outdated version of Firefox a few hours later. I don’t want to blame that company – they did a great job at what they did. But the overall way of thinking there was old-fashioned, strict and not open-minded at all. Primarily it’s the people’s mindset that differentiates those two companies completely. I can’t really imagine that this first company is a workplace where you really feel comfortable and where you’re looking forward to a workday. At the time I worked there, they were about to release a little mobile app, whose development effort I estimate to only few weeks of intensive work of a small group of developers. The app’s purpose was great, but unfortunately, it was modern and innovative. Therefore there were only too few people to insistently support it. And there’s also the fact that processes were ways too sluggish to do a rapid development. As a result the app is still not released, but instead, two american countries each released an app with pretty much the exact same purpose. So much for that mindset in german companies – of course and as always, there definitely are exceptions (a really big global player originated in Germany at which one department prints out document to hand it over to the other department, at which a trainee typewrites it to make it digital again, not being one of them).

Another alarming fact I want to mention in this context is that the average internet speed in Germany is even far behind countries like Sri-Lanka and Vietnam.

“Once a new technology rolls over you, if you’re not part of the steamroller, you’re part of the road. — Stewart Brand”

What this all amounts to is that Germany should really watch out to not get passed by countries where the people are more ambitious and motivated and less conservative and formal. We should never rest on our laurels but try to permanently improve in a continuous evolution – or to quote many speakers at the conference mentioned above: to not fall into the process of disruptive self-destruction.